Our church, East Hills Alliance, is going through a lot of exciting changes these days, as we launch our second campus this fall. It has been such a welcomed growing experience for me especially as it is bringing changes to my role as a leader. The way we’ve set up the structure of our ministry is to be one church in two locations. Each ministry at the new campus has designated a volunteer as “campus leader” for that ministry. For example, in the worship ministry we have a “campus worship leader” and a “campus tech leader” and I work closely with both of them. The idea is that church staff will be in charge of the vision and casting that vision to the campus leaders. Then the campus leaders have the authority to carry out the vision.

I’m finding that I’m the type of person who likes to do things myself and this is not the best quality in a leader! However, I am also finding the joy that a leader discovers when they cast vision and give authority to others and see them succeed. As I’m in the process of learning these skills, I’ve been challenged to know where to draw the lines between vision casting and authority. What decisions to let others make and when to help make the decisions. When and how much to guide the process.

As I’ve been wrestling with this I was recently reminded of a leadership principle from Brad Lomenick. The principle says to have, “clear lines of authority distributed throughout the organization, and always directly connected to responsibility AND authority”. As I think about this I could really see how authority responsibility need to be linked. If a leader is given the responsibility to do a job but not the authority, the task will be cumbersome, and the leader will have a hard time being successful.

We can illustrate this with an imaginary scenario. Let’s say that a superior tasks a leader that works under her with planning a weekend retreat for volunteers. The superior gives the leader responsibility to plan the event, but undermines the leader’s authority. The leader decides that the event will run from 9am - 3pm on Saturday. But, because he doesn’t feel he has authority to set the times of the event, he checks with his boss. She decides that 9am is too early and changes the time to 10am - 4pm. When he tells her who he is planning to have cater the lunch, she tells him that she had already called a friend of hers and asked that she cater the lunch. In this situation, we can see how the micromanaging from the superior will cause him to feel frustrated and the superior ends up doing much of the work even though the responsibility for the event was given to the leader. The problem, that in this case manifested itself as micromanaging, is that the leader was not allowed to hold the authority along with the responsibility.

Similarly the opposite can be just as troublesome. If the leader is given the authority to carry out a task but not the responsibility the task may not even get done at all. This type of scenario may be less common since we generally tend to hand out jobs or tasks in terms of responsibility rather than in terms of authority. For instance, job descriptions usually say, “will be responsible for…” rather than, “will have authority to do…” However, it is not impossible to believe that giving out authority without responsibility can be a problem.

We can illustrate this with the same imaginary scenario as before: A superior wants to task a leader working under her with planning a weekend event for volunteers. The superior tells the leader, “The volunteers will look to you for times when they can get away and grow together as a group. You are the person who has the authority to plan and lead such events”. Such a statement gives the leader the authority to lead the event, but it does not communicate that it is the leader’s responsibility to do so. Unless the leader feels a sense of responsibility for such an event from within himself, the event will probably not happen. If the superior expects that the event will take place then responsibility for the event must be communicated along with the authority.

As I think about these things it is so clear to me that authority and responsibility go hand in hand. They are so linked that it is difficult to think about how to unlink them, and still succeed.

However, I think there is one more thing that if it is missing from the authority and responsibility relationship will make a leader’s success difficult. That thing is “resources”. It does no good to give a leader authority and responsibility if they do not have the resources to carry it out. Some resources that we must be careful to give could include, money, training, time, equipment etc. To make use once again of the example we’ve used above, it does no good to expect that the leader would plan and host a weekend retreat complete with a catered lunch if there is no budgeted money made available to the leader’s use.

As leaders who lead other leaders, we must always link authority with the responsibility and ensure that the leader has the resources needed to be successful.

Some questions to think about: (or discuss in the comment section)

In the example we’ve used, we saw how micromanaging, or taking on responsibility that should have been given away, robbed the leader of authority. What other ways do we hamper our leaders from having the authority, they need in order to be successful?

Where does authority come from?

What if a leader doesn’t feel the sense of authority? How can we help them to own it?
Posted by Jesse Jorgensen at 4:11 PM No comments:

An Audio Tool I Can't Go Without

Hey everyone! I thought I'd take a minute and talk about an audio tool that I have used for quite a while but have recently found I really can't go without!

These days, I don't get too many chances to work behind the sound board for a live event, but when I do, I really enjoy it. Recently, I ran sound for a wedding. The tech requirements were pretty simple, there were no live instruments or vocalists, just the preacher, a handheld mic for the vows, a slideshow, and I was given a couple cd's with mp3's to be used during the wedding marches (wedding marches? is that what you call them in these modern times??). Anyway, it was all pretty much the usual requirements.

Even though all these things were pretty simple, one thing I hate doing is trying to juggle fader levels and cd's in and out of a cd player. So I always load the songs into my computer. But even then, running songs in iTunes can be a little bit clunky because you are still managing a fader and then starting and stopping songs with the computer (I know.. I know... that's not that hard, get over it,  right?) Well, there has to be a better way.

This is where the audio tool I told you I'd talk about comes in: "Qlab".

Qlab is great because you load in all your media. It can handle audio and video files, or even a live video feed. You then build into your project all the cues that you need. These cues can be things like; fade in or out, stops, starts, loops, wait "x" seconds and then start - you name it. Pretty much whatever you can imagine. Then once everything is programed in, you just have a big "GO" button. And each cue you have preset is fired from this one button. You can see this makes it great for weddings or live events where you need to start and stop media at very specific times with smooth transitions in between. And you can see how it can really take the pressure off! And, since it can trigger media to play on top of other media it is perfect for triggering sound effects for more complex shows such as a theatrical productions.

Furthermore, Qlab is so customisable. You can make any keyboard key you'd like become the key that commands the "GO" button. Because of this feature, I've often used it from the stage to trigger a click track or stems from my usb foot pedal. It isn't as nice as say, Ableton Live, for this sort of thing but it's simple and it works!

Best of all. Qlab is a free download. There is a full version that can be purchased but I've never needed anything but the free software. On the down side it is only for Mac...is that really a down side?  So with all that said, if you use a mac and run sound for live events, I believe you should be using Qlab. Check it out here: 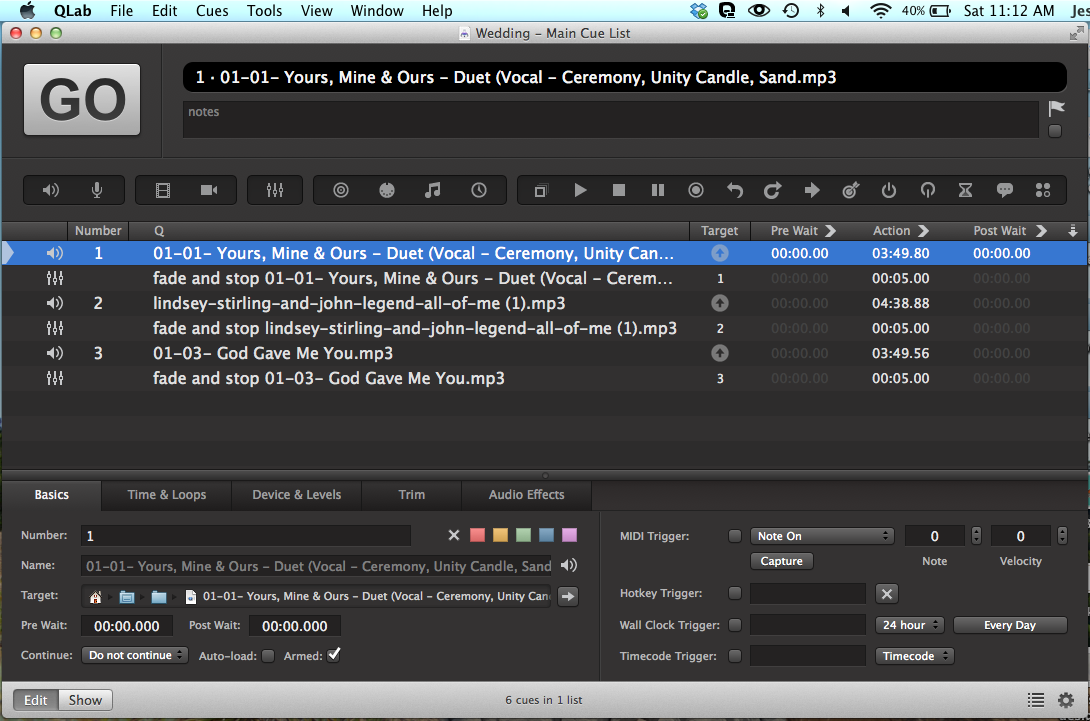 Posted by Jesse Jorgensen at 2:43 PM No comments: